1. Ethical judgements are explained by a dual-process theory ...

1.a ... where a faster process is affective, and

1.b less consequentialist than a slower process.

2. The fast process is unlikely to be reliable in unfamiliar* situations.

3. Therefore, we should rely less on the faster (and less consequentlist) process in unfamiliar* situations.

Offered an objection to this in the last lecture.
We will consider this claim
This claim is what Greene calls the Central Tension Principle ... 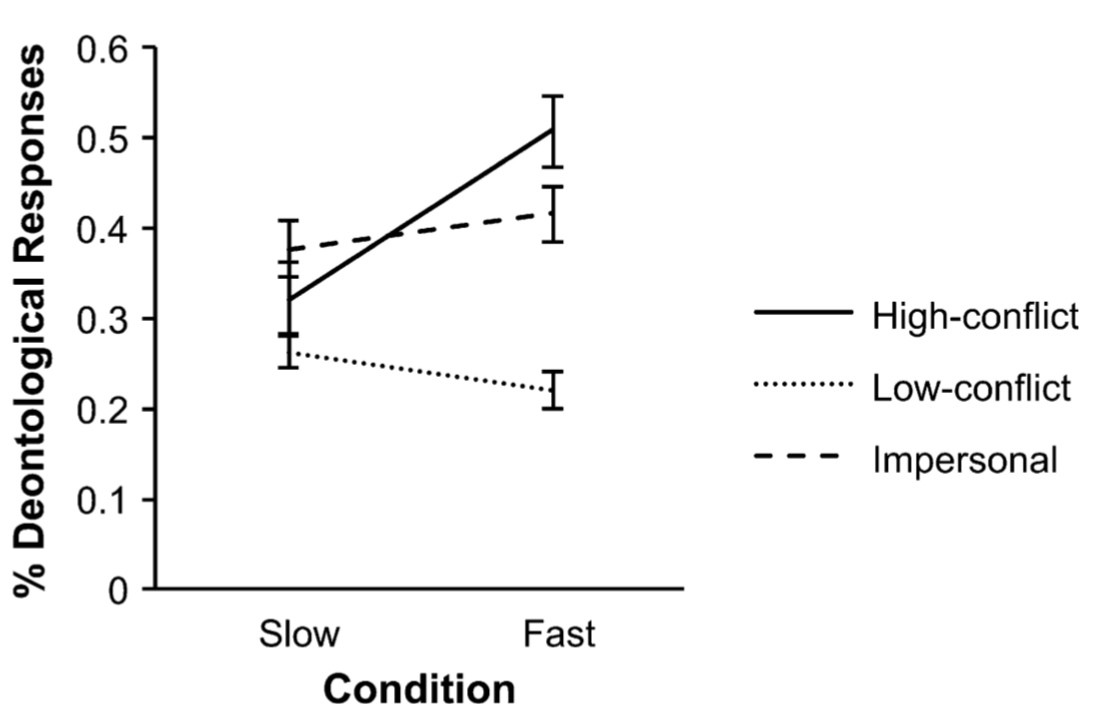 caption: ‘Fig. 1. Average proportion of deontological responses separately for conditions and type of moral dilemma (high- versus low-conflict personal and impersonal dilemmas) with data combined across the fast (i.e., time- pressure and self-paced-intuition) and slow conditions (no-time-pressure and self-paced-deliberation) in Experiments 1 and 2, respectively. Error bars represent standard errors. Only responses to high-conflict dilemmas differed significantly between the conditions’ 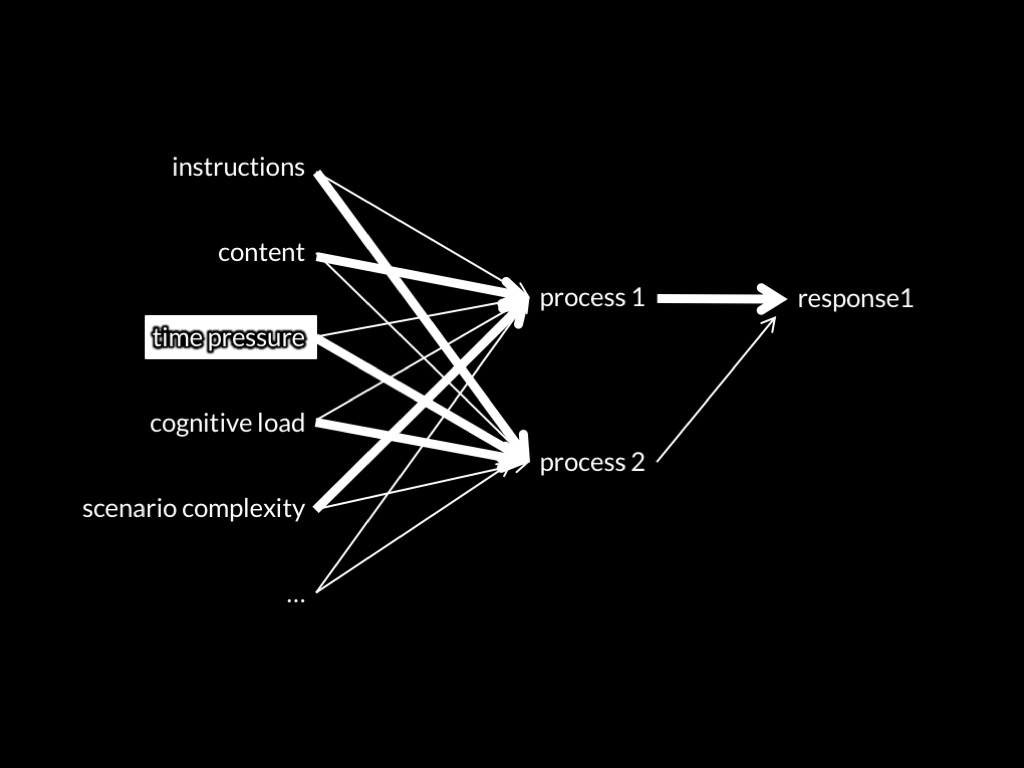 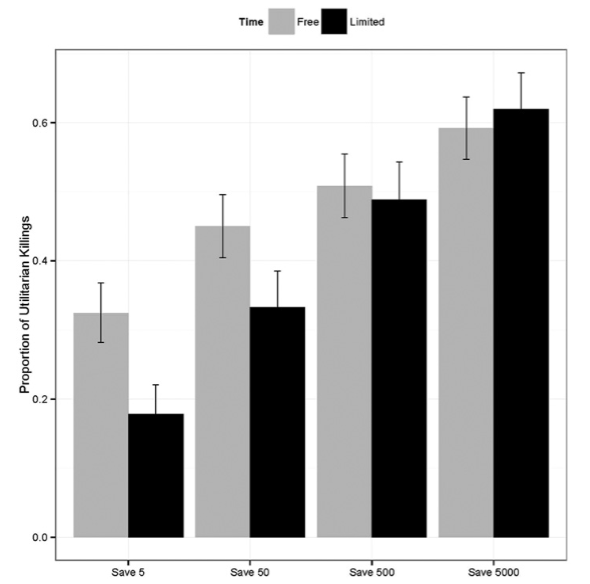 ‘The model detected a significant effect of time pressure, p = .03 (see Table 1), suggesting that the slope of utilitarian responses was steeper for participants under time pressure. As is visually clear in Figure 4, participants under time pressure gave less utilitarian responses than control par- ticipants to scenarios featuring low kill–save ratios, but reached the same rates of utilitarian responses for the highest kill–save ratios.’ \citep[p.~927]{tremoliere:2014_efficient}
\textbf{do now} [save for later, more drama: [also mention \citep{gawronski:2018_effects} p.~1006 ‘reinterpreation’ and p.~992 descriptive vs mechanistsic]] \citet[p.~669]{gawronski:2017_what} argue for an alternative interpretation: The central findings of \citet{tremoliere:2014_efficient} ‘show that outcomes did influence moral judgments, but only when participants were under cognitive load or time pressure (i.e., the white bars do not significantly differ from the gray bars within the low load and no time pressure conditions, but they do significantly differ within the high load and time pressure conditions). Thus, a more appropriate interpretation of these data is that cognitive load and time pressure increased utilitarian responding, which stands in stark contrast to the widespread assumption that utilitarian judgments are the result of effortful cognitive processes (Greene et al., 2008; Suter & Hertwig, 2011).

‘Our critical finding is that although there were some instances in which deliberate correction occurred, these were the exception rather than the rule. Across the studies, results consistently showed that in the vast majority of cases in which people opt for a utilitarian response after deliberation, the utilitarian response is already given in the initial phase’

‘a potential consistency confound in the two-response paradigm. That is, when people are asked to give two consecutive responses, they might be influenced by a desire to look consistent [...] However, in our one-response pretest we observed 85.4% (SD 􏰁 35.3%) of utilitarian responses on the conflict versions. This is virtually identical to the final utilitarian response rate of 84.5% (SD 􏰁 36.2) in our main two-response study (see main results).’

We will take this idea up when considering the CNI model
BUT : if so, why didn’t Bago & de Neys find this?
Puzzle remains IMO

‘unless you’re prepared to say “yes” to the footbridge case [i.e. Drop], your automatic settings are still running the show, and any manual adjustments that you’re willing to make are at their behest’

1. There is a puzzle about apparently inconsistent patterns in judgement (switch-drop).

2. We can solve the puzzle by invoking a dual-process theory ...

2.b the faster process is affective and

3. The faster process is unlikely to be reliable in unfamiliar* situations.

4. Therefore, we should rely less on the faster (and less consequentialist) process in unfamiliar* situations.

We have been considering this claim, so far inconclusive.