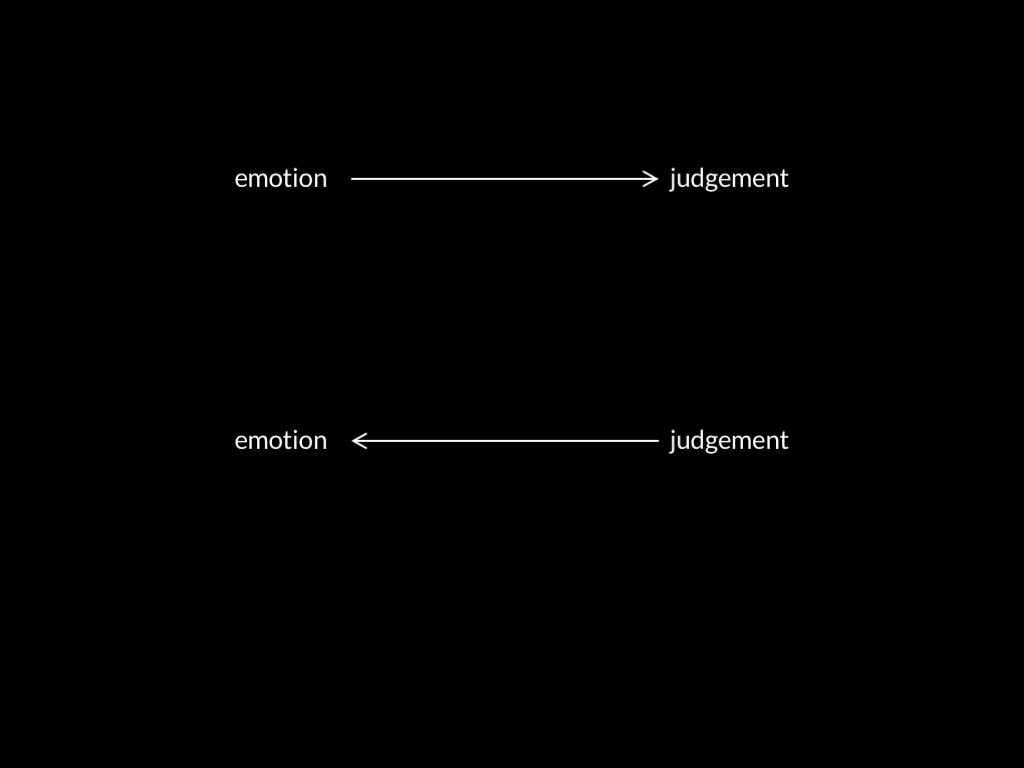 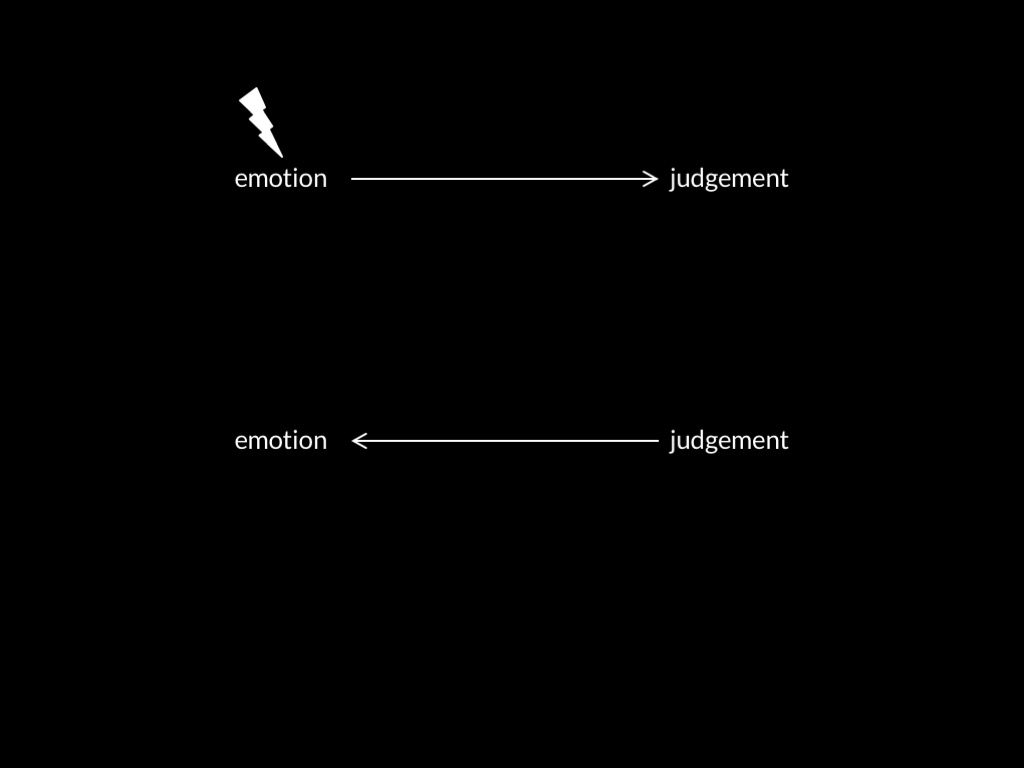 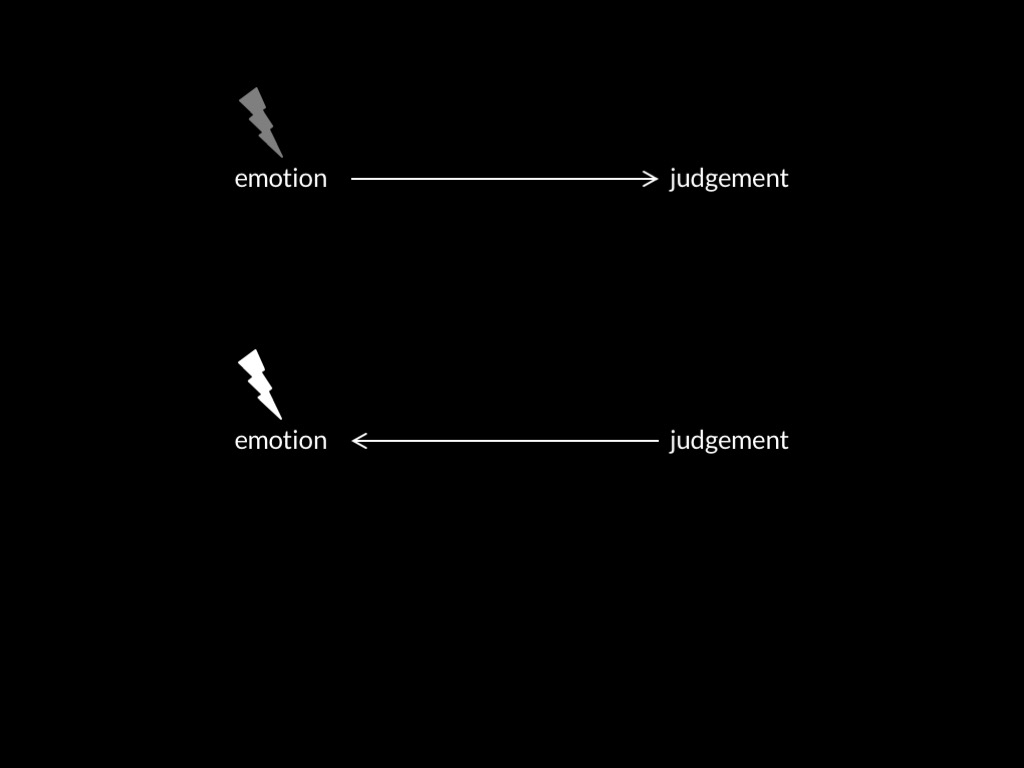 How to intervene on emotion? Here’s the video they used to instill disgust.
In other experiments, they triggered disgust by (i) creating a fart smell, (ii) putting participants in a dirty environment, and (iii) asking them to write about disgusting events in their own lives.
Seems like (i) and (ii) might contrast with (iii) and the video in providing unattributed feelings of disgust.
[just for me -- skip]

‘The sadness clip (from The Champ) portrayed the death of a boy’s mentor, the disgust clip (from Trainspotting) portrayed a man using an unsanitary toilet, and the neutral clip (from a National Geographic special) portrayed fish at the Great Barrier Reef’ \citep{lerner:2004_heart}.

Judge how wrong an action is in six vignettes

Half the vignettes involve disgusting actions.

Disgust (but not sadness) will influence moral judgements,

irrespective of whether the actions judged are disgusting.

Six vignettes (also used in Experiment 2):
‘Three of these vignettes involved a moral violation with disgust—Dog (a man who ate his dead dog), Plane Crash (starving survivors of a plane crash consider cannibalism), and Kitten (a man deriving sexual pleasure from playing with a kitten)—and three of the vignettes involved a moral violation with no disgust—Wallet (finding a wallet and not returning it to its owner), Resume (a person falsifying his resume), and Trolley (preventing the death of five men by killing one man). The instructions told participants to go with their initial intuitions when responding’ \citep[p.~1100]{schnall:2008_disgust}
Private Body Consciousness: ‘Miller, Murphy, and Buss (1981) devised a scale to measure people’s general attention to internal physical states, which they refer to as Private Body Consciousness (PBC)‘ \citep[p.~1100]{schnall:2008_disgust}.
\subsection{Vignettes from Schnall et al (2008) Experiment 4}
\emph{Dog} Frank’s dog was killed by a car in front of his house. Frank had heard that in China people occasionally eat dog meat, and he was curious what it tasted like. So he cut up the body and cooked it and ate it for dinner. How wrong is it for Frank to eat his dead dog for dinner?
\emph{Plane Crash} Your plane has crashed in the Himalayas. The only survivors are yourself, another man, and a young boy. The three of you travel for days, battling extreme cold and wind. Your only chance at survival is to find your way to a small village on the other side of the mountain, several days away. The boy has a broken leg and can- not move very quickly. His chances of surviving the journey are essentially zero. Without food, you and the other man will probably die as well. The other man suggests that you sacrifice the boy and eat his remains over the next few days. How wrong is it to kill this boy so that you and the other man may survive your journey to safety?
\emph{Wallet} You are walking down the street when you come across a wallet lying on the ground. You open the wal- let and find that it contains several hundred dollars in cash as well the owner’s driver’s license. From the credit cards and other items in the wallet it’s very clear that the wallet’s owner is wealthy. You, on the other hand, have been hit by hard times recently and could really use some extra money. You consider sending the wallet back to the owner without the cash, keeping the cash for yourself. How wrong is it for you to keep the money you found in the wallet in order to have more money for yourself?
\emph{Resume} You have a friend who has been trying to find a job lately without much success. He figured that he would be more likely to get hired if he had a more impressive resume. He decided to put some false information on his resume in order to make it more impressive. By doing this he ultimately managed to get hired, beating out several candidates who were actually more qualified than he. How wrong was it for your friend to put false information on his resume in order to help him find employment?
\emph{Kitten} Matthew is playing with his new kitten late one night. He is wearing only his boxer shorts, and the kit- ten sometimes walks over his genitals. Eventually, this arouses him, and he begins to rub his bare genitals along the kitten’s body. The kitten purrs, and seems to enjoy the contact. How wrong is it for Matthew to be rubbing himself against the kitten?
\emph{Trolley} You are at the wheel of a runaway trolley quickly approaching a fork in the tracks. On the tracks extend- ing to the left is a group of five railway workmen. On the tracks extending to the right is a single railway workman. If you do nothing the trolley will proceed to the left, causing the deaths of the five workmen. The only way to avoid the deaths of these workmen is to hit a switch on your dashboard that will cause the trolley to proceed to the right, causing the death of the single workman. How wrong is it for you to hit the switch in order to avoid the deaths of the five workmen? 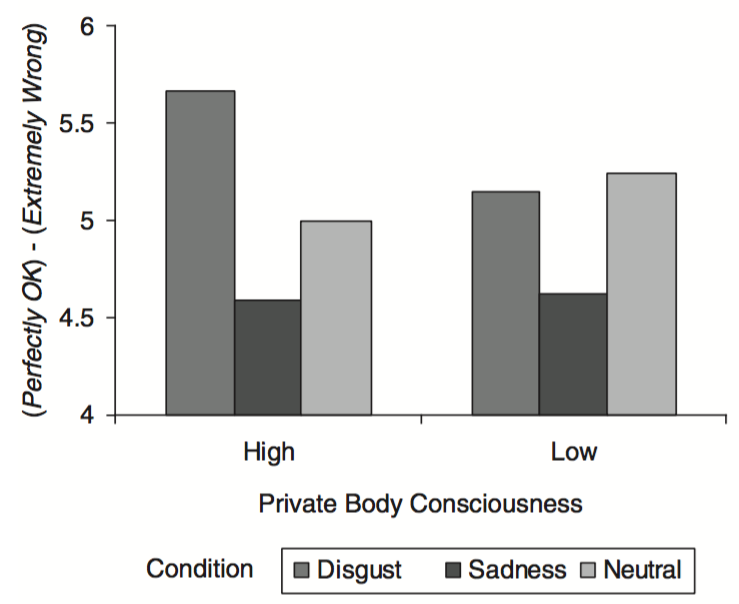 Showing results from Experiment 4. Induce either Disgust or Sadness or neithre using a video clip. Then make moral judgements.
‘For high-PBC [Private Body Consciousness] (but not low-PBC) people, our disgust manipulations increased the severity of moral condemnation relative to the neutral conditions’ \citep[p.~1105]{schnall:2008_disgust}

‘the effect of disgust applies regardless of whether the action to be judged is itself disgusting.

These nonmoral judgements concerned policies. ‘Six public policy items asked participants to rate whether they would support these pro- posals if they were up for a vote in the U.S. Congress on a scale from 0 (strongly oppose) to 9 (strongly support). Three items involved issues of contamination or guarding borders (i.e., spending more money for waste treatment, spending more money to “patrol the borders” against ille- gal immigrants, and making it easier for the government to “expel foreigners” with suspected links to terrorism). The other three issues did not involve such themes (i.e., allowing nondenominational school prayer, increasing federal funding for social science research, and decreasing the number of students per classroom).’ \citep[p.~1100]{schnall:2008_clean}

Third, because the effect occurred most strongly for people who were sensitive to their own bodily cues, the results appear to concern feelings of disgust rather than merely the primed concept of disgust.

Fourth, [...] induced sadness did not have similar effects.’

Is the prediction confirmed?