‘a systematic theory of morality, explaining its origins, development, and cultural variations’

It’s not all about harm.

There may be cultural variations on what is ethical and what isn’t.

So we can’t assume in advance that we know what is ethical and what isn’t.

But if we don’t know what is ethical and what isn’t, how can we study cultural variations in it?

‘the human mind is organized in advance of experience so that it is prepared to learn values, norms, and behaviors related to a diverse set of recurrent adaptive social problems’ \citep[p.~63]{graham:2013_chapter} 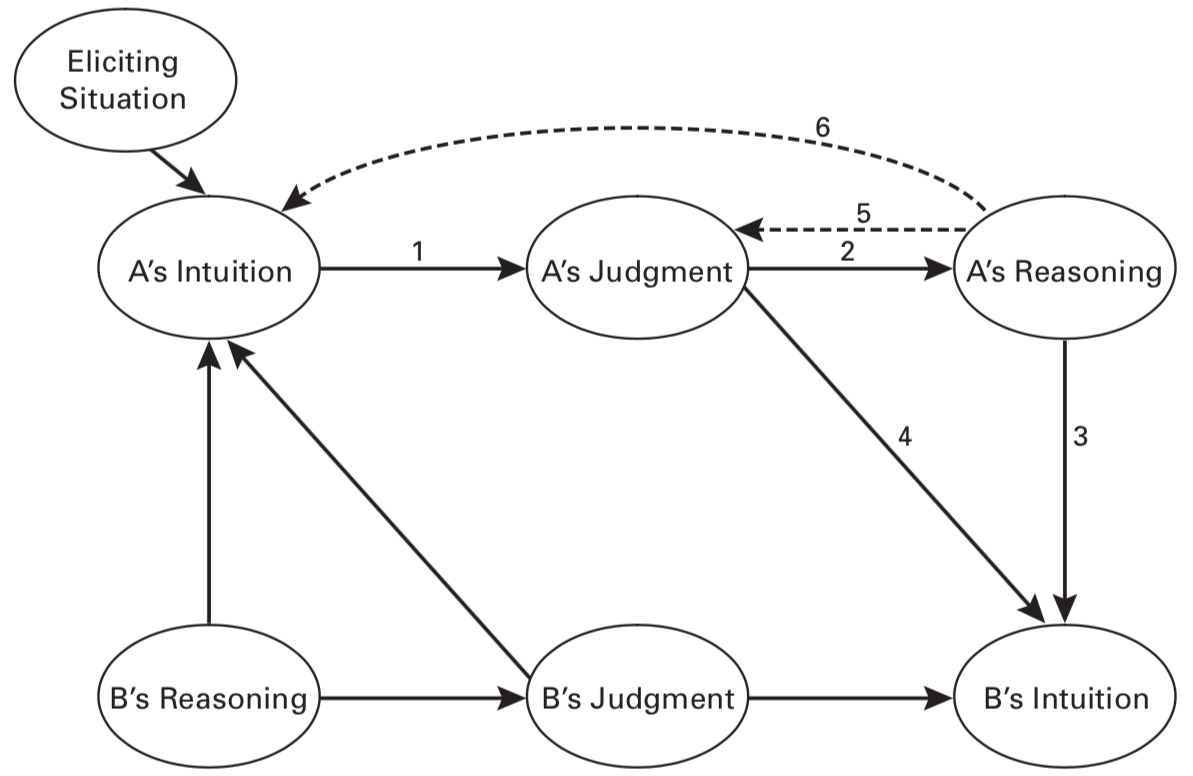 While there’s a lot to say about this model, I want to bracket it for now because it doesn’t bear too directly on the main issues (although it is important).

[pluralism] ‘There are many psychological foundations of morality’

[pluralism] ‘There are many psychological foundations of morality’

It is not important to the theory that these be the only foundations, nor that these be exactly the foundations (perhaps one is wrong, and should be replaced by two different ideas). For example, the theory has some difficulties with Libertarians ... ‘Libertarians have a unique moral-psychological profile, endorsing the principle of liberty as an end and devaluing many of the moral concerns typically endorsed by liberals or conservatives’ \citep[p~21]{iyer:2012_understanding}. ‘Does that mean that libertarians have no morality---or, at least, less concern with moral issues than liberals or conservatives? Or might it be that their core moral value was simply not represented among the five foundations measured by the MFQ? ... MFT’s five moral foundations appeared to be inadequate in capturing libertarians’ moral concerns, but the approach that gave birth to these foundations served us well in examining this new group, and stimulated us to consider Liberty/oppression as a candidate for addition to our list of foundations’ \citep[p.~87]{graham:2013_chapter}.
The individual/binding distinction is probably stable tho.
Some focus just on harm and purity. This might actually be a better approximation given methodological limits.

‘Moral-foundations researchers have investigated the similarities and differences in morality among individuals across cultures (Haidt & Josephs, 2004). These researchers have found evidence for five fundamental domains of human morality’

Very important for philosophers. They aren’t allowed just to make it up.
Big point: we have a method for identifying moral abilities that doesn’t depend on prior assumptions about what counts as ethical.

[relevance] How morally relevant is each of the following?

Whether or not someone suffered emotionally

Whether or not someone cared for someone weak or vulnerable

Whether or not someone was cruel

[judgement] To what extent do you agree with each of the following?

Compassion for those who are suffering is the most crucial virtue.

One of the worst things a person could do is hurt a defenseless animal.

It can never be right to kill a human being

For a clear, nontechnical intro to confirmatory factor analysis (and factorial invariance concepts, which we’ll get to later), see \citet[pp.~S78-S83]{gregorich:2006_selfreport} and \citet{lee:2018_testing}. (Note that you do not need to understand this, but doing so will help you to understand the evidence supporting, and threatening, applications of Moral Foundations Theory to cross-cultural comparison.)

‘The five-factor model fit the data better (weighing both fit and parsimony) than competing models, and this five-factor representation provided a good fit for participants in 11 different world areas.’

‘[...] empirical support for the MFQ for the first time in a predominantly Muslim country. [...] the 5-factor model, although somewhat below the standard criteria of fitness, provided the best fit among the alternatives.

[...] one can conclude that, at least in non-English speaking countries, the MFQ is not the ideal device to measure the theoretical framework of the MFT’ \citep[p.~153]{yilmaz:2016_validation}.

- Test–retest reliability (are you as an individual likely to give the same answers at widely-spaced intervals?)

- external validity (relation to other scales)

see \citep{lee:2018_testing} on measurement invariance
Do you see how the puzzle has been solved by MFT?

There may be cultural variations on what is ethical and what isn’t.

So we can’t assume in advance that we know what is ethical and what isn’t.

But if we don’t know what is ethical and what isn’t, how can we study cultural variations in it?

Does MFT answer this question?

[connecting evolution to MFT]: ‘pathogens are among the principle existential threats to organisms, so those who could best avoid pathogens would have enhanced evolutionary fitness. Van Vugt and Park contend that human groups develop unique practices for reducing pathogen exposure---particularly in how they prepare their foods and maintain their hygiene. When groups are exposed to the practices of a foreign culture, they may perceive its members as especially likely to carry pathogens that may contaminate one’s ingroup’ \citep[p.~93]{graham:2013_chapter} 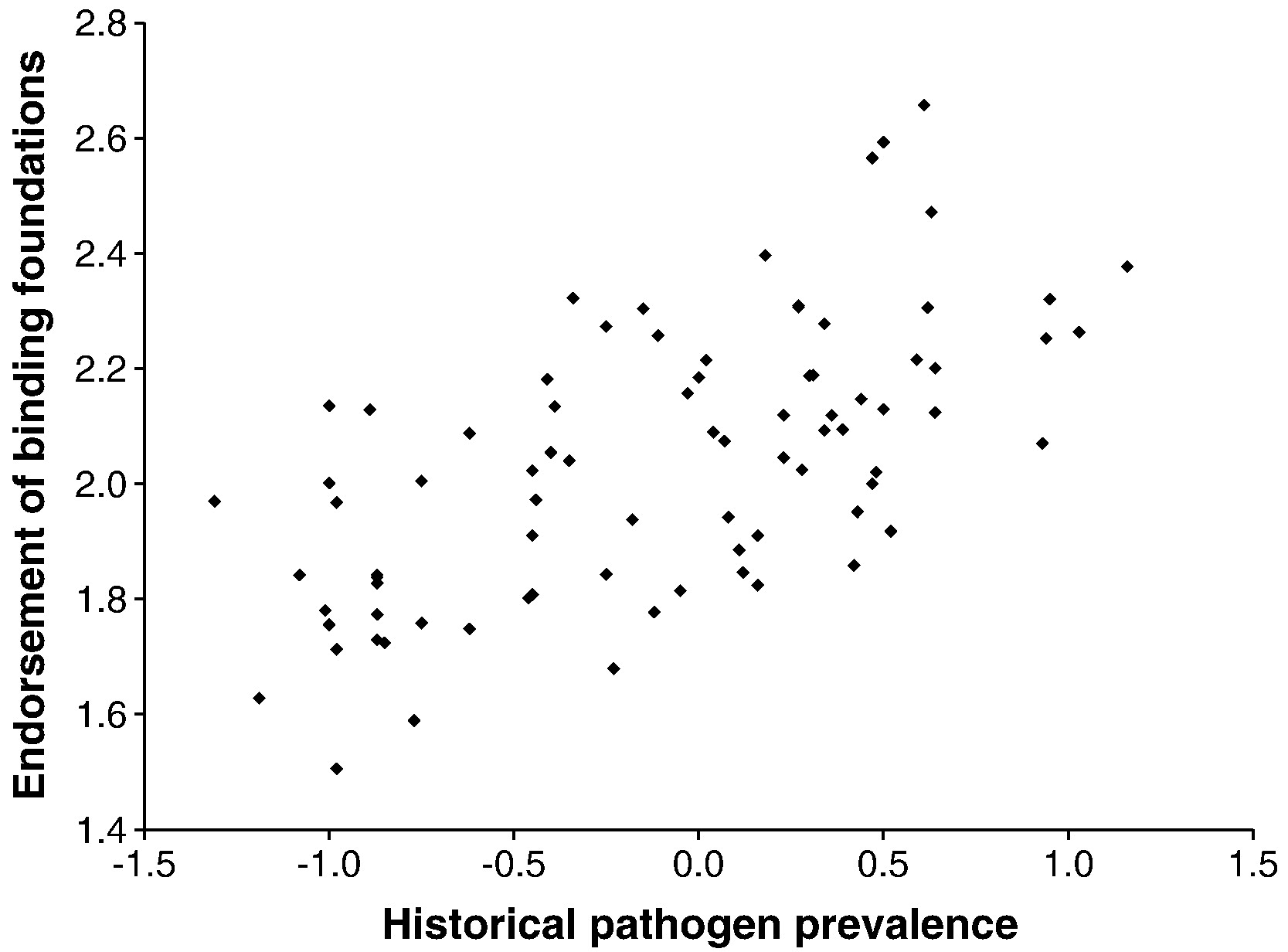 ‘historical pathogen prevalence---even when controlling for individual-level variation in political orientation, gender, education, and age---significantly predicted endorsement of Ingroup/loyalty [stats removed], Authority/respect, and Purity/sanctity; it did not predict endorsement of Harm/care or Fairness/reciprocity’

‘Participants were 120,778 adult visitors (42.0% female, median age=35 years) to the Web site YourMorals.org who completed the MFQ (Graham et al., 2011) and provided demographic data for country (for participants who moved to their current country at age 14 years or older, the country they grew up in was used instead, cf. Graham et al., 2011). Data from the MFQ were available for 147 countries for which historical pathogen prevalence data were available’
No invariance testing done!

\subsection{Argument for Pluarlism} Moral Foundations Theory is pluralist (it postulates more than one foundation). A monist theory would likely identify harm, or something related to harm, as the one foundation. Why accept pluralism? Because ‘[p]urity/degradation judgments predict important thoughts and behaviors over and above Care/harm judgments. For instance, purity concerns uniquely predict (beyond other foundations and demographics such as political ideology) culture-war attitudes about gay marriage, euthanasia, abortion, and pornography (Koleva et al., 2012). Purity also predicts opposition to stem cell research (Clifford & Jerit, 2013), environmental attitudes (Rottman, Kelemen, & Young, 2015), lawsuits (Buccafusco & Fagundes, 2015), and social distancing in real-world social networks (Dehghani et al., 2016)’ \citep{graham:2019_moral}.
‘Inconsistent with Moral Dyad Theory, our results did not support the prediction that Harm concerns would be the unequivocally most important predictor of sacrifice endorsement. Consistent with Moral Foundations Theory, however, multiple moral values are predictive of sacrifice judgments: Harm and Purity negatively predict, and Ingroup positively predicts, endorsement of harmful action in service of saving lives, with Harm and Purity explaining similar amounts of unique variance. The present study demonstrates the utility of pluralistic accounts of morality, even in moral situations in which harm is central (Crone & Laham, 2015)’ \citep{graham:2019_moral} on \citep{crone:2015_multiple}.

‘Moral-foundations researchers have investigated the similarities and differences in morality among individuals across cultures (Haidt & Josephs, 2004). These researchers have found evidence for five fundamental domains of human morality’