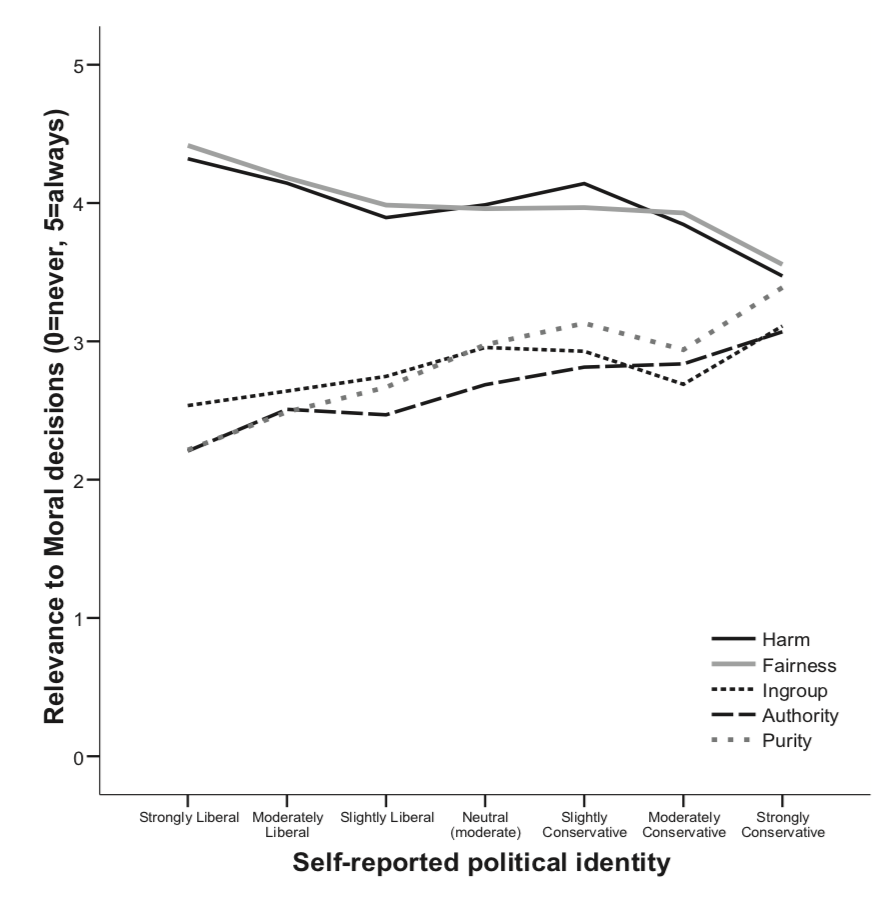 The evidence on cultural variation says socially conservative participants tend to regard all five foundations as roughly equally morally relevant. 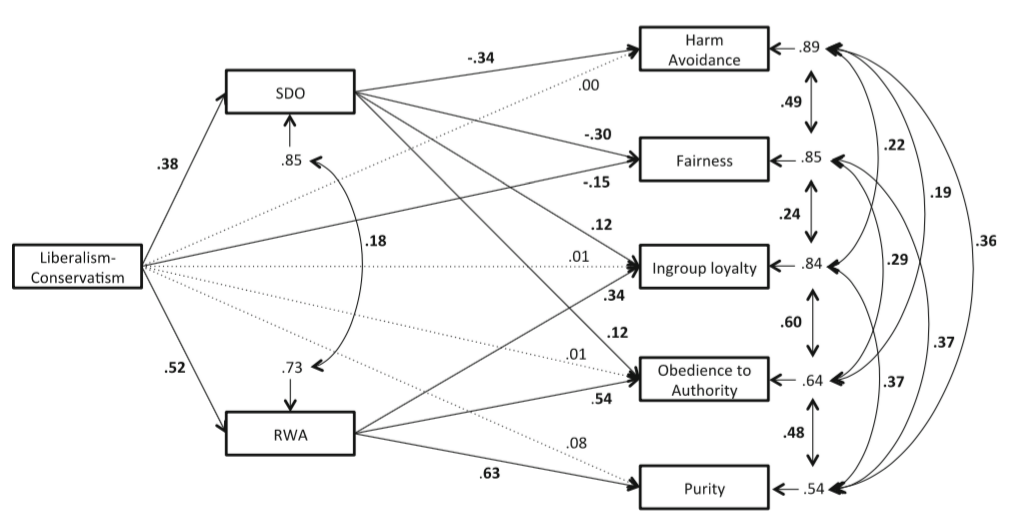 ‘subjective’ conceptions vs. ‘a more independent, objective perspective’
‘Fig. 2 Trimmed path model illustrating that right-wing authoritarianism and social dominance orientation mediate the relationship between political orientation and moral intuitions. Path coefficients are standardized regression coefficients of the trimmed model. Broken lines indicate non-significant paths at p<.05’
SDO : social dominance orientation
RWA : right-wing authoritarianism
I mentioned this before, but I want to spend more time on it because it seems like a case where a little philosophical groundwork could be useful (you job, not mine ...

‘This article [distinguishes] between subjective conceptions of morality
(which are [...] indistinguishable from mere moralizing)
and
morality from a more independent, objective perspective’

My sense: recognising diversity in ethical systems does not, of course, imply approval of them.
Separate two things. First linking ‘subjective conceptions’ to ’mere moralizing’ appears to be a mistake. (You might want to argue that there is no cultural variation in ethics, but you wouldn’t do it like this.)
Put that aside to get to the real issue: Do we want a distinction between these? Is there any use for a distinction bewteen spurious moralizing from genuinely ethical commitments?
Example: someone campaigns against gay marriage. Is it religious conviction that drives them? They might say it is, but we wouldn’t necessarily take their word for it. Well, look at the book they’re basing their actions on. Are their attitudes consistent, or do they have different attitudes to sexuality and to other apparently forbidden thinks (like ursury)?
‘This article [distinguishes] between subjective conceptions of morality (which are, after all, indistinguishable from mere moralizing) and morality from a more independent, objective perspective [...] the moral valuation of ingroup loyalty, obedience to authority, and purity concerns is associated with attitudes and belief systems that may be considered prejudicial and therefore morally unsavory liberal-conservative differences in the endorsement of these three ‘binding’ intuitions may be attributable, at least in part, to the fact that conservatives tend to be higher than liberals on authoritarianism. Furthermore, liberal-conservative differences in the endorsement of fairness and avoidance of harm are attributable to the fact that liberals tend to be lower than conservatives on social dominance orientation [...] The fact that these two types of moral concerns have opposite effects on intergroup hostility and support for discrimination against foreigners and immigrants raises questions about the assumption that ‘binding’ and ‘individualizing’ (or perhaps ‘humanistic’ concerns) should be treated as operating on the same moral plane, objectively speaking’ \citep[p.~416]{kugler:2014_another}.

Note the claim that moral foundations arose in evolutionary history as solutions to specific challenges faced by humans’ ancestors.
There is no obvious contradiction between accepting this and also endorsing Kugler et al’s claims (if you can make sense of their claim to a ‘more independent, objective perspective’.)

Should we distinguish cultural variation from mere moralizing?

Is there even more conflicting research?

Is there yet more conflicting research?

Recall the basic requirements from earlier

- Test–retest reliability (are you as an individual likely to give the same answers at widely-spaced intervals?)

- external validity (relation to other scales)

I’m not mentioning Iurino & Saucier, 2018’s study because they note some limits of their sample and methodology.

Does Moral Foundations Theory provide a model that is invariant?

Davis et al, 2014 : metric but not scalar invariance for Black vs White people

‘the five-factor model of MFQ revealed a good fit to the data on both WEIRD and non-WEIRD samples. Besides, the five-factor model yielded a better fit to the data as compared to the two-factor model of MFQ. Measurement invariance test across samples validated factor structure for the five-factor model, yet a comparison of samples provided metric non-invariance implying that item loadings are different across groups [...] although the same statements tap into the same moral foundations in each case, the strength of the link between the statements and the foundations were different in WEIRD and non-WEIRD cultures’ \citep{dogruyol:2019_fivefactor}.

‘across subscales, there were problems with scalar invariance, which suggests that researchers may need to carefully consider whether this scale is working similarly across groups before conducting mean comparisons’

Are the differences in means measurement artefacts?

On balance, this seems likely.

There is a risk of building a theory on measurement artefacts.

‘entire literatures can develop on the basis of faulty measurement assumptions.’

On balance, MFT seems to be supported by a growing body of evidence.

Although limited, MFT is probably useful and there is no better alternative.