From an old metaanlysis on the relation between attitudes in general and behaviours.
Attitudes generally have relatively little influence on behaviours. How about specifically ethical attitudes?
‘Taken as a whole, these studies suggest that

‘Only rarely can as much as 10% of the variance in overt behavioral measures be accounted for by attitudinal data.

In studies in which data are dichotomized, substantial proportions of subjects show attitude-behavior discrepancies. This is true even when subjects scoring at the extremes of attitudinal measures are compared on behavioral indices.’

Let’s take one study in this tradition.

Measure prejudice and then allow subjects to administer electric shocks to opponents in a game.

Will more prejudiced subjects differentiate between Black and White opponents?

That research is really old!

What’s the state of the art now

on whether attitudes predict behaviours?

As background to the issue about moral psychology and climate change, we first want to look at a more general question. Do ethical attitudes shape political behaviours? (If this is not true, then we risk barking up the wrong tree with climate change.)

‘we conducted four studies that examined whether strength of moral conviction predicted unique variance beyond other indices of attitude strength, such as attitude extremity, importance, certainty, and centrality, on a number of interpersonal measures’

‘exploring whether people prefer greater social [studies 1 & 2; and physical: study 3] distance from attitudinally dissimilar others when the attitude domain was held with high rather than low moral conviction’

‘The effect of moral conviction on social distance was robust when we controlled for the effects gender, age, attitudinal extremity, importance, and centrality’

‘In contrast, participants were more tolerant of having a distant than an intimate relationship with an attitudinally dissimilar other, when the attitude dissimilarity was on an issue that the participant held with low moral conviction, results that held even when we controlled for attitude strength.’

We were taking a look at this reference. Does it support the authors’ claim? Not obviously. But I want you to think about it
For what it’s worth, I’m not satisfied. moral attitudes predict preferences for social and physical distance: seems only indirectly related to politics. (Politics is life.)
ok what about other potential sources?

‘As strength of moral conviction about one’s candidate preference increased, so did the likelihood that one voted’

In both studies: ‘the effects of moral conviction on political engagement were equally strong for those on the political right and left’

For a review on moral conviction covering some of the research on political behaviours, see \citet{skitka:2010_psychology}.
There is a tricky question about whether we know attempts to measure moral conviction succeed, which \citet[pp.~36--7]{skitka:2008_moral} discuss (‘it has been our goal to measure moral conviction without confounding this construct with other markers of attitude strength ...’). Although this is not covered in lectures, there is some overlap with the upcoming discussion of the validity of using the Moral Foundations Questionnaire for cross-cultural comparisons.
So: I think there is some evidence for this claim, but what about moral convictions linked specifically to climate change?

What about political attitudes to climate change specifically?

[consequences] ‘Overall, how positive or negative do you think the effects of climate change will be on [COUNTRY]?’. 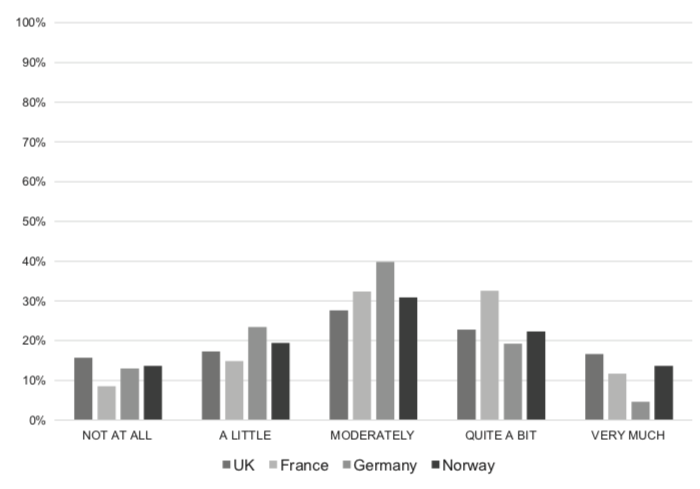 ‘Figure 2. Moral concerns about climate change across countries. Percentages of respondents choosing one of the answer options displayed above.’
Key thing to notice is just that there is some variance between countries, which will be important for disentangling effects of ethical concerns.
This was of framing the moral issue will be important later [because it appeals specifically to liberals, according to Feinberg & Willer]

[policies] ‘To what extent do you support or oppose the following policies in [COUNTRY]?’

Research question (simplified): to what extent will the consequences and ethics influence the policies? 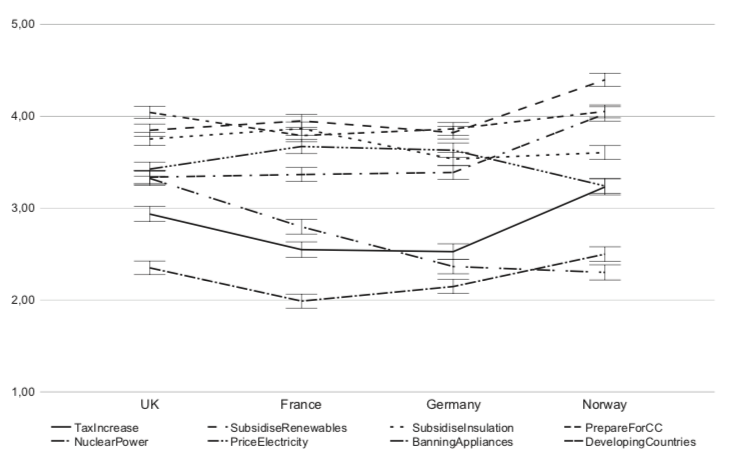 moral concerns turned out to be substantially more important than consequence evaluations, explaining about twice as much of the variance.’

Implication: ‘threat raising campaigns may not be the preferred strategy to encourage public engagement with climate change’

So: I think there is some evidence for this claim, although it is clearly a complex issue and much more could be said. My aim here is this: I hope you now at least understand how researchers have attempted to gather relevant evidence, and have some sense that the claim may be true.

‘Moral convictions and the emotions they evoke shape political attitudes’